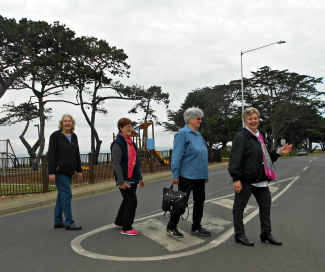 It’s a popularity contest with a difference. A local community group is giving residents four choices to improve walking around St Leonards on the Bellarine Peninsula.

A pedestrian crossing, a footpath, a shared path and a 40 km/h speed limit.  These are the different but complementary projects that locals have been asked to choose from.

Local group Locomote are one of a number of Walkability Action Groups around the state that are aligned with Victoria Walks. Locomote has been advocating to make it easier, safer and more enjoyable to walk around St Leonards, Portarlington and Indented Head since 2008 and has now launched a new campaign called Happy Feet St Leonards.

The community is being asked to give their input by voting for their favourite project.

Amongst the four projects is the creation of a pedestrian crossing which will connect the end of the Murradoc Road to Harvey Park.

“This is a popular place which families walk to. Many people have difficulty trying to safely cross the road from the shops to the playground, especially over the summer months when it gets busy with cars and caravans” said Jan Wade, Locomote Member and St Leonards resident.

A shared path along the north side of Murradoc road is the second project being put to the community.

“There is no footpath once you get past the primary school and it makes it really hard for people who use electric scooters, wheelchairs or walking frames to safely walk along the road to get to the school, bus stops or shops,” said Mary-Anne Cosic, local St Leonards resident and electric wheelchair user.

St Leonards Primary School has been requesting a path along this road for a number of years, as many students walk or ride this route to get to school.

“Our kids are in danger when they are walking or riding to school as there is no footpath or off road bike path for them to use” said St Leonards Primary School Principal, Jenny Cowburn.

Locomote believe a shared pathway would take pedestrians and bike riders away from the traffic and make it safer for them to get to the school and into the town centre.

A footpath along Bluff Road between Dudley Parade and Mcleod Street has been included on the campaign list to extend the existing footpath network along the coast and connect with the St Leonards Lake Reserve walking track.

The campaign is also calling for a permanent 40km speed limit on Murradoc Road, from the St Leonards Primary School crossing to The Esplanade.

The St Leonards community has the opportunity to support the campaign by voting for their favourite project idea. Voting sheets have been made available from the local supermarket along with the entry box for completed forms.

The campaign has been featured in the Bellarine Times and more than 100 people voted in the opening days of the campaign.

Once the people have spoken, Locomote will take the results to the local Member of Parliament, Lisa Neville, to discuss the community’s needs.