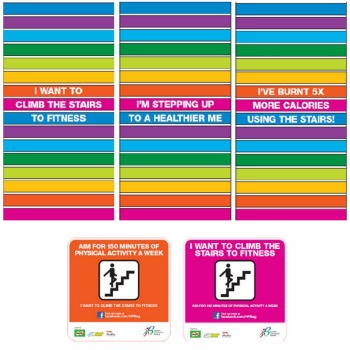 The effectiveness of point-of-decision prompts (PODPs) was evaluated in a Singaporean study, for increasing incidence of stair-climbing in a train station.

In the train station, a large floor sticker (pictured) was installed at the base of the stairs, and colorful stair-riser PODPs displayed bearing motivational physical activity messages. In a control station, no PODPs were used.

Researchers reported a 48.5% increase in stair use during the four weeks the PODPs were on display. After the PODPs were removed, the number of stair climbers returned to near baseline levels.

Researchers concluded the use of POPDs in this study was effective in increasing incidence of stair climbing in the experimental train station, compared to pre and post PODP periods.