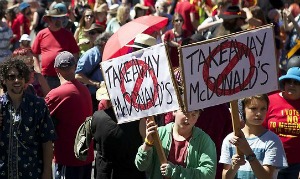 The community backlash against MacDonalds in Tecoma has brought further calls for a greater emphasis on health in the planning system.

An opinion piece in the Herald Sun by Jane Martin of the Obesity Policy Coalition argues that councils cannot effectively promote health under current Victorian planning laws.  She points to unimplemented recommendations from the 2012 Parliamentary inquiry on Environmental Design and Public Health as evidence of a lack of government action.

Consideration of health issues was noticably limited in the discussion paper released in the development of a new Metropolitan Planning Strategy. In our submission to that process, Plan for a Walkable Melbourne, Victoria Walks argued that promoting public health should be an explicit objective of the draft Strategy (due to be released any day now).

The desirability of walking for transport is already recognised to some extent in the Victorian planning system.  Unfortunately this tends to be undermined by other provisions that promote driving, such as minimum parking requirements and the failure to target increased development density to walkable locations.  Dealing with these tensions will be the ultimate test of the planning system's approach to walking.