Quality parks get us out and about 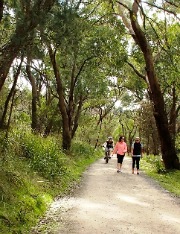 A study of nearly three thousand Victorians aged 57 to 67 has confirmed that people with access to quality parks walk more for exercise.

Studies around the world have not been entirely conclusive about the importance of parks to walking.  Some studies have found the proximity and quality of local parks has a connection to levels of exercise, while others have not.  This study involved multiple surveys of 2,700 middle-aged people from Melbourne or Victorian regional towns, with a fairly even split between rural and urban areas.

Park proximity was found to be an important predictor of whether people did or did not walk for exercise, although not for those who had retired. The authors speculate that retired people may have the time to travel to a park located further away, making park proximity less important.

It is possible that other factors were obsuring the relationship between parks and walking.  The study did not consider the walkability of the streets in the local neighbourhood.  The authors note "characteristics other than park proximity (such as street design and traffic safety) may be more important to stimulate recreational walking among retirees."  They also noted "we assessed proximity and quality of the nearest park and it has been shown that the nearest park is not always the most frequently visited park."

The study, tongue-twistingly titled 'Park proximity, quality and recreational physical activity among mid-older aged adults: moderating effects of individual factors and area of residence,' is reported in the International Journal of Behavioural Nutrition and Physical Activity.