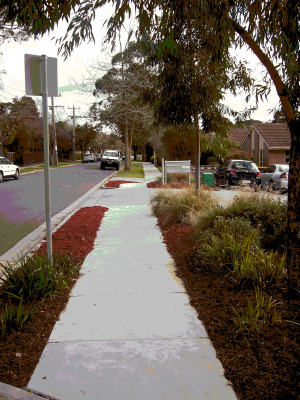 The Strategy appears to recommend substantial new spending on cycling corridors and walking improvements, although the exact dollars are not clear.  To their credit though, Infrastructure Victoria recognises that the TAC funded Safer Cyclists and Pedestrians Fund is not enough.  Victoria Walks has lodged a submission supporting the Strategy, while suggesting a range of changes.

The Strategy recommends spending $16.5 million on retrofitting three currently car-oriented suburban centres with walking and cycling infrastructure, as pilot projects. Originally this was planned as ten projects, so the scaling back is disappointing. As noted by Infrastructure Victoria themselves, “retrofitting established suburbs will be necessary to achieve the state’s policy of ’20-minute cities’.” It is hard to reconcile this need with such a small amount of funding, compared to other infrastructure options.

And the big question is whether the Government will accept and implement the recommendation to spend more on walking and cycling.  Media coverage of the 30 Year Strategy was dominated by the idea of ‘transport network pricing’ – charging people to drive on certain roads.  The Government was quick to distance itself from that idea.  Victoria Walks supported it, because effective road pricing can be expected to encourage walking for transport, both on its own and in association with public transport.

The Strategy includes a recommendation to develop a stronger evidence base and more transparent decision-making on investments in culture, sport and recreation.  Victoria Walks' submission supported that, because walking has been under-resourced compared to organised sport. In the current financial year, $46.4 million has been allocated to sport and recreation, but the proportion of that funding allocated to walking is negligible.  The non-investment in walking through sport and recreation is despite the fact that ‘walking for exercise’ is the most popular form of sport or recreation in Australia, with 19.2% participation, followed by ‘fitness/gym’ at 17.4%, while no other activity exceeds 7.5%.

The Strategy promotes development in and around employment centres and the Principal Public Transport Network (trains and trams). Our submission supports that – putting people within walking distance of everyday destinations.  We argued the government should go further and:

One disappointment is that Infrastructure Victoria have backed away from their earlier plan to introduce ‘strict liability.’ Victoria Walks argues they should give consideration to options that reinforce the need for drivers to give way to walkers and cyclists, and ensure that drivers who cause crashes are held accountable for their actions, thereby discouraging poor driving.