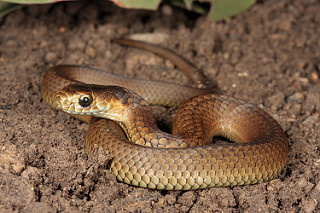 At Victoria Walks we’re all about encouraging you to get out and about, exploring the great outdoors. So how to tackle the ssssseriously sensitive topic of snakes?

It’s about this time of year we begin getting messages from people about snake sightings – many of them expressing alarm and a desire to take a break from walking.

We thought we’d put together a little information to help our walking community (and those more inclined to slithering) to live and let live.

We were inspired recently by the attitude of a group of Geelong locals who greeted a snake sighting at Point Addis with enthusiasm (from a sensibly safe distance of course!) See their video here.

Danielle Bain from Geelong-based family nature club Muddy Boots and Sandy Hands says that when it comes to snakes, there is safety in numbers. “The good thing about taking lots of people on a walk – especially lots of noisy children – is that you generally only ever see the tail-end of a snake because you’ve scared it away.”

While the snake captured in the above video was one of three spotted that day, it was cause for excitement. “Prior to that we had only seen a snake properly once in six years.”

Snakes and kids
The group usually attracts 10-12 families for its scheduled monthly walks and Danielle said while it’s good to prepare children for snake encounters, they don’t dwell on the subject. This is despite the fact her group walks in areas teeming with snakes such as the You Yangs, the Surf Coast, the Bellarine and Werribee Gorge.

“If it is a snaky kind of day (a warm day that comes at the end of a cooler spell) I will remind the kids of what to do. My advice is: we freeze, then slowly walk away, then tell an adult.”

If someone decides to head off the beaten track to relieve themselves, Danielle advises “stomping loudly”.

She says snakes should not deter people from walking because “snakes are all around us, all the time - a lot more than people realise.”

The more time people spend in nature, the more comfortable you become she points out. “People from Geelong are pretty relaxed about snakes because there are heaps of snakes near the Barwon River.”

Snakes: they're everywhere!
While snakes are more common around the urban fringe or in rural parts of Victoria, they can also be found close to cities and towns, particularly around watercourses and parkland.

Nick Clemann, a scientist from the Victorian Government’s Department of Environment, Land, Water and Planning echoes Danielle’s advice saying the best thing people can do is “be aware that snakes may be around, and be informed on how to react to them.”

As winter thaws to spring, snakes also begin to thaw out... Warmer weather in October and November sees snakes beginning to mate, and they’ll also be out and about looking for food and shelter. But in good news, snakes can move more quickly in the warmer months so they’re more likely to get out of your way.

Tiger Snakes and Lowland Copperheads (photo above, provided by DELWP) are the most frequently encountered snakes near the coast of Victoria, while Eastern Brown Snakes are more common in drier areas. Red-bellied Black Snakes are also common in some areas. While it is rare for these snakes to bite, DELWP cautions all are dangerously venomous.

What to do if you see a snake:
• Keep calm and try to move yourself, anyone with you and your pets away from the snake
• Never touch or attempt to capture or hurt snakes – instead call the Department of Environment, Land, Water and Planning on 136 186 for further advice, or call a licensed snake catcher if the snake cannot remain where it has been found
• Have a spring clean - clean up around the house and cut lawns regularly – snakes are attracted to shelter such as piles of rocks and timber, sheets of metal, or building materials
• Undertake first aid training, ensure your first aid kit contains several compression bandages, and if someone is bitten, call 000 immediately
• Snakes are protected under the Wildlife Act 1975. It is illegal to capture, kill or harm them. Bites can occur when people try to kill snakes.
Source: Victorian Government’s Department of Environment, Land, Water and Planning

Snaky statistics
The medical and scientific community are pretty excited about the recent release of the most comprehensive snakebite study in Australia’s history.  The Australian Snakebite Project examined data from 1500 unlucky people who received snake bites between 2005 and 2015. The upshot? “There are around 3000 reported snakebites each year in Australia, resulting in 500 hospital admissions and an average of two fatalities.”

Three-quarters of the people bitten are males aged in their 30s.

We’ll finish with this sensible thought from one of our own. “When it comes to snakes, fortune does not favour the brave.” (Duane Burtt, Victoria Walks)

Snakesbites are rarer than you think, The Conversation, July 30 2017

And check out Museum Victoria’s  field guide app, which can help you identify over 950 species, including birds, mammals, fishes, reptiles, frogs and invertebrates from terrestrial, freshwater and marine environments.