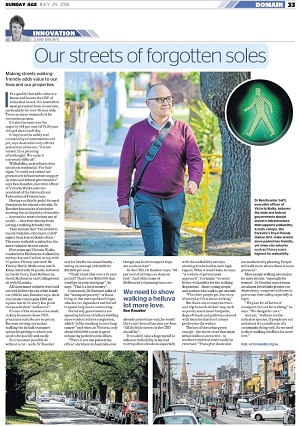 It seems Victoria’s real estate agents have a very keen understanding of the value of walkable towns and suburbs, but when will our state and federal politicians catch up?

It was great to see the value of walkability making headlines in The Age’s Domain section on the weekend with a feature article about the work Victoria Walks is doing to draw attention to the state’s most-neglected form of transport; walking.

Victoria Walks’ executive officer Ben Rossiter pointed out that walkability not only has great health outcomes but adds immense dollar-value to real estate and to a city’s Gross Domestic Product. For Melbourne it’s a tale of two cities – a largely walkable inner Melbourne, and a car-dependent outer Melbourne.

It’s no accident that inner suburbs such as Carlton, Fitzroy, St Kilda, South Yarra and Collingwood have high “walk score” ratings. These older suburbs were laid out ‘well before the era of the family car’ and home owners in these areas reap the benefits of real estate values that gain $298 per square metre for every five-point increase in their “walkscore”.

But further out the picture is of “transport poverty” because residents have been forced by car-centric planning over decades to spend much more time commuting in cars – often crawling through congestion.

Victoria Walks recently called for a “whole of government” approach as part of a six-point plan to redress the imbalance in transport planning, which has particular consequences for young people and seniors who walk to get around.