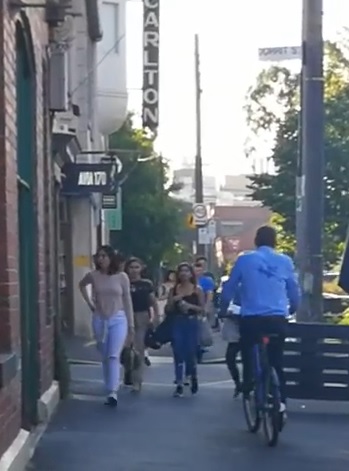 Research commissioned by Victoria Walks has found cyclists and pedestrians are potentially at greater risk of injury if age restrictions on footpath cycling are lifted.

Australia’s largest walking organisation is joining the Council On The Ageing and Vision Australia in calling upon politicians to ignore cycling lobbyists’ calls to allow teenagers and adults to ride on footpaths in Victoria.

In response to calls by Bicycle Network for similar changes here, Victoria Walks engaged transport consultants MRCagney to review the research on footpath cycling. The Footpath Cycling Discussion Paper found that cycling on footpaths introduces risks of cyclist-pedestrian collisions and:

• “Footpath cycling is accompanied by a distinct set of safety risks for cyclists, particularly associated with visibility between motor vehicles and cyclists at intersections and driveways.”

• “… crash risks for cyclists may be higher on the footpath than on the road.”

•  “…the presence of cyclists on footpaths is a real concern for people walking, particularly for elderly or other vulnerable users such as the vision impaired.”

The MRCagney report describes a number of studies including NSW research that “estimated that the crash rate for cyclists on the footpath was 5.6 times that of cyclists on the road.”

“The research review found that between 6 and 17 per cent of all cyclist crashes in Australia and New Zealand occurred on footpaths, even though footpath cycling was not allowed in most areas,” said Ben Rossiter, Victoria Walks Executive Officer.

“Footpaths are not designed for cycling. Most are narrow, often in poor condition, with overhanging trees and high fences blocking views of vehicles coming out of driveways,” said Dr Rossiter.

A study by the Amy Gillett Foundation found that “over half of the child bike rider crashes [between 2002 to 2012] … involved being hit after emerging from a footpath or driveway.

The MRCagney research review also found that moves to legalise all-ages cycling could open local councils up to liability issues. “The onus to make footpaths safe for cycling will fall to local councils,” Dr Rossiter said.

Victoria Walks’ opposition to footpath cycling was supported by Victoria's Herald Sun, which ran an editorial on the topic. The story was also covered by Nine News, 7 News and Ten News with all stories explaining the impact more footpath cycling would have on vulnerable pedestrians and their walking participation.

Mixing walking and cycling is bad news for walkers, particularly older walkers or those with a disability, the discussion paper reported:

• The presence and behaviour of cyclists is a key concern for older pedestrians. In one survey, approximately 40% of seniors identified cyclists on shared walking and cycling paths to be a factor which discouraged them from walking.

• In crashes between walkers and cyclists, the most serious injuries sustained by the pedestrian are usually because of secondary impacts to the pedestrian’s head after hitting the ground. The risk of a head injury to a pedestrian occurs at impacts with bikes travelling as slow as 10 km/h.

• A study from Sydney and Newcastle found the average speed of cyclists on footpaths was 21 km/h, the same speed as cyclists on roads.

“As people age, walking and accessing public transport becomes increasingly important and older walkers are particularly vulnerable sharing with cyclists”, said Ronda Held, COTA CEO. “Cycling safety is a concern for COTA, but solutions should not be at cost of safety for pedestrians”.

Vision Australia Manager of Government Relations Chris Edwards said, “People who are blind or have low vision rely heavily on walking and accessing public transport to travel independently but feel extremely nervous about doing so in environments that are commonly shared by cyclists.”

“Allowing more cyclists on footpaths will only increase the anxiety felt by people who are blind or have low vision and reduce their confidence in traveling independently.”

Dr Rossiter urged cyclists concerned about risks on busy roads to keep up the pressure on governments. “Keeping the pressure up on politicians to create safe, separated spaces for both cyclists and walkers is the best way to increase both cycling and walking participation going forward.”

More information, including the report and recommendations, is available at www.victoriawalks.org.au/footpath-cycling