E ok: e-scooters are alright, but not on footpaths 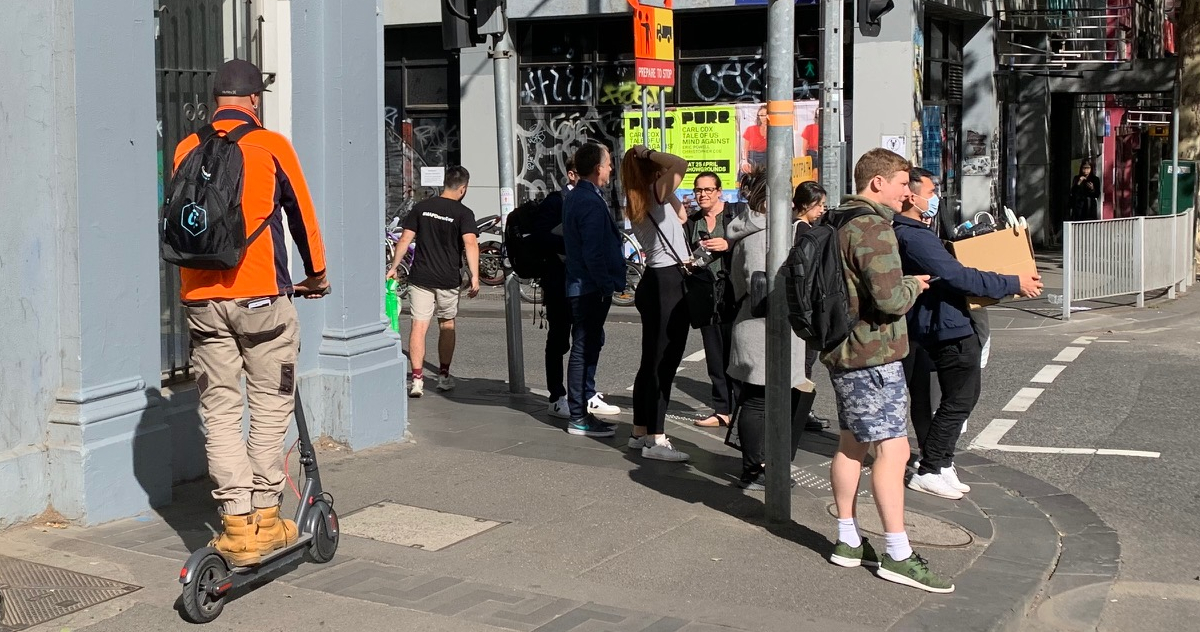 You might not have seen them yet, but they’re coming.

Despite most electric-scooters, skateboards, hoverboards and similar powered devices being illegal in Victoria, they are already hitting our streets and footpaths. Victoria Walks has decided while we can live with them, we can’t share footpaths with them. Here’s why we believe laws must be strengthened to protect walkers and walking.

E-scooters on footpaths are likely to put many people off walking, particularly older people and those with a disability. Banning e-scooters from footpaths is supported by many organisations (even some e-scooter companies) and has been the approach adopted by many countries already.

What is the current situation here?
Nearly all e-scooters currently available for purchase have a power output in excess of 200 watts and/or top speed of more than 10 km/h. Either of these features make them illegal to use on any road or footpath – in fact in any public area – in Victoria.

Bizarrely however, these essentially illegal vehicles are available for sale. Apparently the Australian Government believes you should be able to buy them, even though you can’t legally use them.

The National Transport Commission (NTC) is reviewing the Australian Road Rules with a view to allowing e-scooters, electric skateboards, hoverboards and other personal mobility devices (PMDs) on our streets. In an October 2019 publication they suggested their preferred option was to allow them to travel on footpaths up to 10 km/h and local roads at a maximum speed of 25 km/h. Victoria Walks prepared a submission pointing out that this is nice in theory, but not practical in the real world, because speed limits are unlikely to be understood, obeyed by users or enforced by Police. The 10km/h limit on footpaths will be as good as useless. For this reason, PMDs such as e-scooters should not be allowed on footpaths at all.

What is Victoria Walks’ position?
Victoria Walks remains unconvinced that it is a good idea to allow e-scooters at all. Most of the purported benefits are based on the assumption that they will be used instead of cars. But the evidence around the world shows that they are mostly used instead of walking, cycling and public transport.

The Australian Government, however, seems determined to open the door to any new device. It has also shown no interest in enforcing any mechanical controls on e-scooters that might limit them to a particular speed.

If e-scooters can travel faster than 10km/h – typically 25-30 km/h or faster – Victoria Walks believes they belong on the road, not the footpath.  Their ability to travel much faster than walking speed puts people using footpaths at both real and perceived risk of injury, particularly more vulnerable people such as those with disabilities or who are older.

E-scooters should be treated in the same way bicycles are in Victoria, permitted to use the road and any bicycle infrastructure such as bicycle lanes or shared paths, but not footpaths.

Why shouldn’t e-scooters be used on footpaths?

Allowing e-scooter riders to use footpaths will disproportionately affect older pedestrians and people with a disability. These groups are the most vulnerable using our public spaces and have limited options for getting around, often relying heavily on walking and public transport to travel independently. Older people make up a significant proportion of the Australian population and this cohort is growing.

There is limited direct evidence on the impact of emerging devices on walkers. In the sixteen months from August 2018, two of the 29 e-scooter related deaths reported worldwide were pedestrians. One was an 81-year-old male and the other a 90-year-old female. There are many more pedestrians injured as a result of e-scooters, but generally these are not reported in the media, with a focus instead on injuries to people riding e-scooters. But the potential danger posed by e-scooters was evident in one report from Brisbane, where a woman startled by a scooter passing too close and fast fell and sustained injuries. They never even came into contact. In Victoria, the TAC doesn’t cover the cost of injuries sustained as a result of a crash where a motor vehicle is not involved.

Victoria Walks expects PMD use on footpaths has many parallels with footpath cycling. Australian research found approximately 40 per cent of seniors identified cyclists on shared walking and cycling paths to be a factor which discouraged them from walking.

Monash University Accident Research Centre studied the impact of electric and hybrid vehicles on pedestrians who are blind or have low vision. The research confirmed that people with vision impairment are already experiencing significant problems with these vehicles, most commonly in places where pedestrians have right of way such as on footpaths at driveways and on pedestrian crossings. One Vision Australia client who is reliant on walking and public transport to get around reported having lost three white canes to near misses.

E-scooters present an opportunity to add further impetus to the push for multi-modal streets with greater provision of protected cycle lanes and bike paths that can also be used by e-scooters and other PMDs.  We should be aiming for streets like Denmark and the Netherlands, not Queeensland.

Is there support for keeping e-scooters off footpaths?
The International Transport Forum (ITF) released a report in February 2020 with the first recommendation being to ban PMDs from footpaths to keep pedestrians safe.

The European transport organisation POLIS released a discussion paper in November 2019 about micro-mobility. In relation to PMDs and footpath users, it states:

“Persons with visual disabilities need a functional walking path, as regular as possible, without unexpected obstacles…People with motor disabilities can see them [PMDs], but have a hard time moving them out of the way.”

The International Federation of Pedestrians, of which Victoria Walks is a member, does not support the use of motorised vehicles on footpaths, except for those used by a person with a disability.

Here in Victoria, The Council on the Ageing and Vision Australia also support keeping vehicles capable of travelling faster than 10 km/h off footpaths.

And Victoria Walks has some unexpected allies.  The most prominent e-scooter company, Lime, now agrees that they should not be allowed on footpaths here.

“E-scooters should be banned from footpaths and only ridden by adults to ensure safety and maximise pedestrian amenity.”

Interestingly, our observations so far in Melbourne suggest that those who currently choose to use e-scooters (illegally) tend to treat them like bicycles, using local roads, bicycle lanes and shared paths in preference to footpaths.

What are other countries doing?
Countries everywhere are grappling with the same issues around PMDs that we are. Many governments have already banned e-scooters from footpaths, including Singapore, Spain, Jakarta (Indonesia), France,  Germany and Peru. In the USA, laws vary between places, with some states permitting them on the street but not on footpaths. Like Australia, the UK is reviewing the law prohibiting their use in any public space and requires retailers to put safety warnings on e-scooter packaging. In Singapore, shops selling PMDs are required to notify users they are not permitted on footpaths.

The way forward
E-scooters are most like bicycles in terms of speed and should be treated as bicycles are in Victoria, permitted to use roads and bicycle infrastructure but not footpaths. In response to suggestions that PMDs might be allowed on the footpath, POLIS state that it is “ethically unacceptable for those with power and responsibility in this domain, be they private or public sector officials, to accept or tolerate this regression in rights and public safety as a ‘price to pay’ for innovation” because of the serious and disproportionate effect it has on people with disabilities.

The increasing use of e-scooters and similar devices should be seen as an opportunity to make the roads safer for everyone, not using footpaths as a dumping ground for devices seen as inconvenient to car drivers. Governments should focus on creating safe, separate spaces for those not in motor vehicles (think protected bike lanes) and slowing vehicles where different users share space. In addition, getting people out of cars and onto other forms of transport will make the other forms of transport safer. Footpaths must remain safe and inviting places for people to walk, talk, play, live and socialise.

Read our submission to NTC for more detail on our position