Ways to make streets safer for everyone

Melburnian Christine Filiamundi prefers walking and using public transport over driving a car.
"Walking is the thing that keeps me connected to my community,” the 73-year-old says.

But Christine's love of walking was nearly shattered when she was hit by a turning driver on Lygon Street six years ago. See and hear her story below.

Right-turning drivers account for 16% of the crashes that injure or kill people who are walking in Victoria.

Christine has recovered physically from the crash at the busy intersection of Lygon and Queensberry streets in Carlton, but says she still carries the mental trauma.

“I've never really got over the shock” the Brunswick grandmother says. “There is a level of fear I carry with me now... I was crossing at the lights. I was crossing with a whole lot of people. I felt safe. Why wouldn't I?”

Christine is one of about 2200 Victorian walkers who are admitted to hospital or present to emergency departments because of crashes each year.

Injured pedestrians are a largely forgotten cost of transport systems (and budgets!) that prioritise moving people in vehicles over the safety of people who walk. But road environments that feel unsafe are also known to deter people and families from walking, meaning people miss out on the many benefits of walking.

Victoria Police record drivers as "offending" in nearly half of collisions that kill or injure walkers but there are many ways that the intersection where Christine was hit could be improved to help ensure streets are safer for all users.

A New York study of 95 intersections showed installing lights that have red and green arrows to regulate when a driver is allowed to turn over a pedestrian crossing reduced the number of these crashes by 45 per cent. 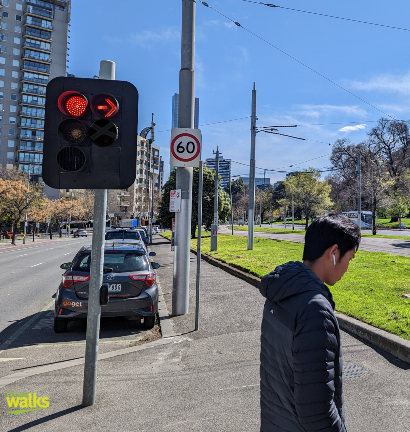 Fully controlled lights are one way we can reduce the chance that a driver’s error will have devastating consequences for someone on foot.

Reducing the width of roads (and the speed of vehicles) also improves safety because it is easier to see other road users, and gives everyone more time to react to unexpected situations.

Older adults are particularly vulnerable where road environments are unsafe. People aged over 65 years are about one-fifth of Victoria’s population but make up about one-third of the walkers who are killed in Victoria.

Safety changes are particularly important in areas where governments want to encourage people of all ages to walk and ride bicycles (near shops, schools and near public transport). Making walking safer could also help to reduce the number of short car trips Victorians make each week (over 5 million in Melbourne and Geelong).

Victoria Walks is calling for greater state-level investment in walking to fast-track changes that make streets safer and easier to cross.

And despite her experience, Christine is determined to keep walking. “Walking is so good for the body,” she says. “It is the thing that saved me, and helped me recover from the crash... Everybody should feel safe to walk, everywhere”.

Sharing Christine's story is one way you can help create change by showing you expect the safety of vulnerable road users to be a priority. Add a personal message to friends and networks when you share Christine's video via YouTube, at Facebook or at Twitter.

Everyone should be safe to walk

Walking as we age

Supporting each other by walking