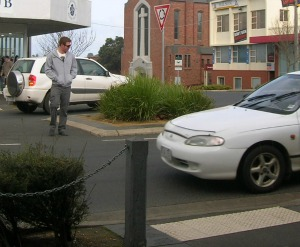 Pedestrian safety at intersections is generally poorly researched.  Often studies look at crash rates at different types of intersections without considering either traffic or pedestrian volumes. In this type of study, the intersections that are used least by pedestrians will appear to be the safest.

It is also important to understand that a crossing that is safe in theory will not necessarily be safe in practice.  For example, signalised intersections that do not give priority to pedestrians and cause substantial delay may lead to people crossing illegally, particularly where there is a break in the traffic, or avoiding the intersection altogether.

Apart from traffic volume, speed and driver behaviour, common problems for pedestrians in intersection design include:

The IMAP Greenlight Project monitored 20 signalised intersections in Melbourne where changes were made in an attempt to improve pedestrian safety and amenity.  Key findings include:

Pedestrian countdown timers, providing users with information on the available crossing time remaining, are used widely in Europe and are now mandated for use in all new traffic signals in the USA.  Limited trials in Australia suggest that there may be improved convenience and reduced delay for pedestrians (Austroads Guide Information for Pedestrian Facilities 2013).

Pram ramps are critical for crossing with wheeled devices such as prams, wheelchairs and mobility scooters. They are also useful for others with limited mobility and invaluable to vision impaired pedestrians for indicating where to cross as well as which direction to take (Austroads 2013).

Pedestrian refuges and median strips are proven tools to make crossing roads safer and easier (WHO Pedestrian Road Safety Manual).  Darebin City Council's success in retrofitting Cramer Street, Preston, is a great example.  This included installation of a 3.6 metre wide central median, with multiple formal crossing points and tree planting in the median.  Pedestrians were surveyed before and after the changes and the proportion giving the street the lowest safety rating halved, while the proportion giving it the highest safety rating more than doubled.

Pedestrian refuges and median strips can be combined with road narrowing, which has a double benefit of reducing both vehicular traffic speeds and pedestrian crossing distances (WHO Pedestrian Road Safety Manual).

Road dieting, including use of shared space rather than traffic signals, can be surprisingly effective at managing intersections and crossing.  See for example the video Experiment: Town in England Turns Off Traffic Lights. 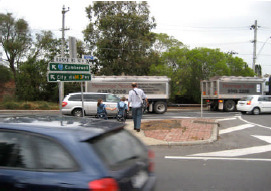 "In most cases the level of road crossability (for pedestrians) at roundabouts is low - car drivers generally do not give way to waiting pedestrians and it is they who need to wait (in the heat or other poor weather conditions) for a gap in the traffic."  Walkability and Wayfinding in Midland

Roundabouts are problematic for pedestrians because drivers do not need to give way to pedestrians in any circumstance. This also contradicts and therefore potentially confuses the rules for other intersections. At roundabouts drivers tend to focus on avoiding conflict with other cars and ignore other road users. In a study of pedestrians in Western Australia, 72% found it harder to cross at a roundabout than a conventional crossing (Browning 2001, cited in Evaluation of an alternative treatment at a roundabout).

The standard engineering response is to provide marked pedestrian crossings set back from the actual roundabout. Because the crossings are not on pedestrian desire lines fewer people will use them and they may be deterred from walking altogether.

Pedestrian issues with roundabouts are also discussed in the VicRoads traffic management note Roundabouts and Traffic Signals Guidelines for the Selection of Intersection Control.  Roundabouts are even worse for cyclists - see Bicycle Network.

Slip lanes pose a risk for pedestrians because:

Most of the current literature considers how to improve slip lanes to ensure vehicles give way (usually zebra or signalised crossings). However, these treatments are only considered warranted by high pedestrian numbers, meaning that many intersections with slip lanes don't have them, and further confusion because drivers think that those without them must mean vehicle right of way.

Pedestrian fencing or guard rails have traditionally been used to control pedestrian behaviour and funnel pedestrians to designated crossing points.

The UK Department for Transport guide Pedestrian Guardrailing looks at pedestrian fencing in detail and suggests that they do not improve pedestrian safety.  In fact, a study of 78 sites (all outside London) found that the likelihood of pedestrian collision was 1.6 times higher at the sites with fencing.

When Darebin City Council removed pedestrian fencing from a crossing in Preston, the proportion of people who described the crossing as 'very safe' rose from 32% before the fencing was removed to an average of 42% afterwards.

If considered at all, pedestrian fencing should be seen as a 'last resort' option to managing pedestrian crossings.

Here is a link to both sides of the fencing debate in the UK. We are encouraged by Ben Hamilton-Baillie's position.

15 walks in the west