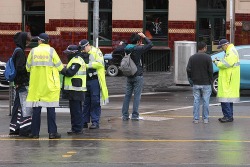 Further detail on the road rules relating to pedestrians is provided on the VicRoads website, along with information on pedestrian safety.

When to give way?

Motorists have a duty of care to watch for pedestrians on the roadway.  This was considered by the Supreme Court of Queensland in Perfect v MacDonald & Anor 2012.  The Court noted "in pedestrian cases, typically a heavier share of responsibility falls on the motorist even if the degrees of departure from the standard of reasonable care be more or less equal." In this particular case a pedestrian was struck while standing at least partially on the road, but the Court ordered the driver and her insurance company to pay him $124,000.

The motorist's duty of care does not appear to be reflected in the official perspective on pedestrian crashes.  Rather there may be a subtle blaming of the victim - or at least not blaming the driver. The Bayside Review Local 23 Jan 2013 reported on an incident where an elderly lady was killed and another was injured when a car was driven into a wall of the Sandringham Library in Melbourne. Yet no apparent blame is attributed to the driver and the Police response is to warn everyone else, including pedestrians, to be careful! In 2008, Victoria Police claimed drivers were at fault in only 4 of 39 pedestrian deaths (see page 65, Safe Speed: promoting safe walking and cycling by reducing traffic speed). However TAC research Exploring the pedestrian crash problem from the perspective of injured pedestrians found that drivers were generally at fault in a sample of about 200 crashes.

Some argue that we should refuse to accept pedestrian deaths as 'part of life' and clearly place the onus of responsibility to avoid accidents on drivers, who are responsible for the hazard - see Walking is Not a Crime: Questioning the Accident Axiom and Strict liability: why it's a life-saver.

A range of other legislation is relevant to council administration of transport, including walking.