What is a road diet?

A road diet or 'rightsizing' is simply the reallocation of  road space to better serve the street's full range of users. Excessively wide roads are a major barrier to pedestrians both practically and psychologically. A road diet is often a prerequisite to a street becoming a place where people want to be rather than just a corridor for movement.

Street films have made a excellent short video on road dieting which summarises the origins and different forms of road diets. Studies have consistently shown that road diets do not adversely affect the carrying capacity of a road after treatment, in some cases efficiency is actually improved post treatment.

Reducing the amount of space (road width) allocated to traffic has a number of benefits for pedestrians and other users of the street, including: 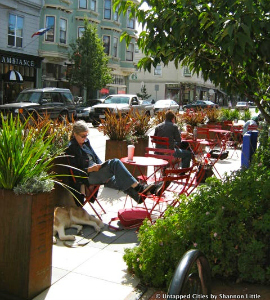 The Project for Public Space has a comprehensive collection of road dieting projects where communities have swapped road space for spaces for people. Notable examples are ‘The Porch’ in Philadelphia and Broadway in New York. Rethinking Streets also provides good US examples.

On a local level the City of Melbourne have been steadily increasing their supply of pedestrian priority public space. In the period from 1985 to 2006, 35 hectares of road asphalt were converted to pedestrian use. This mass conversion of road space into footpath space has been directly linked with the increase in café seats on offer in Melbourne. The Melbourne Places For People report details how the City of Melbourne went from 94 outdoor cafes in 1993 to 356 in 2004.

Road dieting can also be achieved on a temporary basis. An idea to convert road or parking space into a temporary park or seating area spawned the concept of parklets in San Francisco. The idea proved highly successful and has now been replicated around the world. Adelaide City Council have initiated and extended a successful parklet programme. PARK(ing) day replicates parklets in a very temporary way by replacing car parks with open space for a day or a week.  See the case study below for local examples.

Road dieting can be taken to the point where road space is entirely given over to pedestrian use in the form of a mall or in the form of a pocket park. See the case study below for local examples.

The Open Streets Initiative Measuring Success Toolkit provides a range of resources and information on temporary closures of roads to traffic, with a focus on evaluation.

Another form of road diet are shared space zones. Shared space integrates pedestrians, vehicles and other road users through the removal of traditional street elements such as signs, traffic lights, pedestrian barriers, road markings and kerbs. This unorthodox treatment can paradoxically improve safety as the increase in ambiguity forces all road users to behave more cautiously. This idea is explored in riskier streets reduce accidents.

By creating uncertainty, roads actually become safer as people compensate for the perceived risk by being more alert and careful. How shared space prevents accidents contains before and after examples of successful shared space zones on streets of varying carrying capacity.

Further information on managing the interaction of pedestrians and traffic, with a particular focus on shared space, is available at Hamilton-Baillie Associates.

For local examples of various road dieting treatments see the case studies below.

15 walks in the west